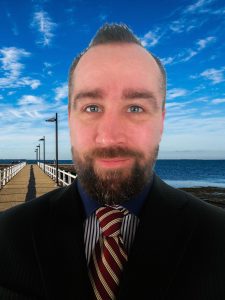 The 2019 race to decide who will be the President of the Republic of Wynnum 2019-2020 is officially now underway. In time honoured tradition the new President is chosen by a very simple mechanism – online auction to the highest bidder.

This is seen to be the fairest mechanism for filling the position, seeing as the new President has no legislative or executive powers. The position does however come with a range of benefits available during his/her term. These are…

Our current President, Martin Kristoffersen (pictured), assumed office as the winning bidder in the same process last year with a winning bid of AUD$295.

The only slight change to the process this year is that the bidding window is a little shorter and the process closes the day before Independence Day (which is this Tuesday 12th November) – bidding closes this Monday 11th November at 6pm (QLD time). Election costs have forced the minimum bid from $50 last year to $75 this year.

An Inauguration Ceremony for the new President is planned shortly after appointment. The lavishness of the ceremony will be closely correlated to the level of the winning bid.

Anyone wanting to put themselves forward in the 2019 Presidential race can bid on the Office of the President page.

One thought on “2019 Presidential race now on”